Churro Waffles with a Chili Chocolate Sauce. This amazing waffle recipe is simple and makes for a deliciously sweet breakfast or an after dinner treat. I make my waffle batter from scratch every time and that is the foundation to the churro waffle. These buttermilk waffles are smothered in cinnamon sugar and then topped with a chili chocolate sauce. The kick from the chili really cuts through the sweetness of the cinnamon sugar. I promise you, this recipe will soon become a family favorite!

So I got this idea when my husband and I moved from the big city of New York to the small town of El Paso, Texas on the border of Mexico! We made the move when my husband Kevin got accepted into medical school here. Never did we think we would find ourselves living in the southwest but we are so glad we did! Since living on the borderlands we have been immersed into the beautiful Mexican culture as well as a few other benefits such as the perfect weather and gorgeous views of the desert, mountains, and sunsets. This Mexican influence has really made its way into my recipes and I am loving it! It actually wasn't until I moved here that I had my first churro! I know its hard to believe that I missed out on this delicious treat for the majority of my life, but don't worry I am making up for lost time 😉

My husband is a big sweets guy, so he prefers his breakfast just as sweet as he likes his desserts. And it just so happens that waffles are his favorite breakfast food, so I knew I wanted to create a new waffle recipe for him.

I got the inspiration for this recipe from one of our small, go-to breakfast spots here in El Paso. They have churro waffles at this place and my husband was instantly in love. We probably went back for these waffles three times in the same week! So of course I thought it would be a cute idea to try and create my own churro waffle recipe for him. And just like I expected, he LOVED them. I used my go to buttermilk waffle recipe with whipped egg whites. This creates a SUPER fluffy and crunchy waffle. Then basically all I do after that is brush each waffle in butter and HEAVILY coat them in cinnamon sugar. They are so crunchy, fluffy, sweet and packed with cinnamon...pretty much perfect.

I top these waffles off with a chocolate sauce. But not just any chocolate sauce. I decided to add a few of the spices that I find a lot of here in Mexican food. The chocolate sauce has cinnamon, nutmeg, chili powder and cayenne pepper. So this sauce has a spicy kick to it that balances out the sweet chocolate perfectly. You almost need that spice. It might sound weird to you but trust me, you wont eat chocolate any other way once you try this sauce.

If you are really looking for an even sweeter breakfast option, you can pair these waffles with my Cinnamon Toast Crunch Ice Cream..... you might get diabetes after that but it will be worth it.

A perfect morning is waking up to smells of cinnamon sweetness in the air. Serve these warm and enjoy how fluffy, crunchy, and chocolaty these are with that little kick at the end from the chili.

Lastly, if you try out this recipe, be sure to leave a comment/rating on how they turned out. I love hearing from you guys and will try my best to reply to every comment! And don't forget to tag me on Instagram! 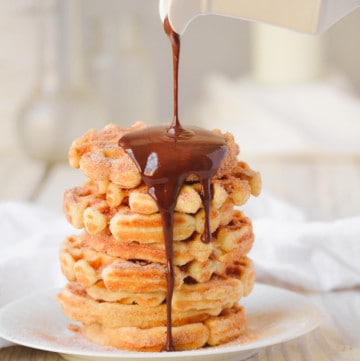 for your weekly recipe fix.

Hey, I'm Megan! My recipes are all inspired by the people and places I love. I try to live, bake and eat simply but beautifully. I hope to inspire others to bake, make and find their inner artist.

How I feel about summer ending…. Peanut butter