These Baked Pumpkin Donuts are moist sweet and full of fall spices. Baked instead of fried; these donuts are easy and quick to make. Then covered in cinnamon sugar adding that perfect bit on the outside. These Pumpkin Donuts are so delicious.

These Pumpkin Donuts taste similar to apple cider donuts except with pumpkin flavor instead. They are perfect for fall and will fulfill all your pumpkin dreams! They are tender, moist, super cinnamon and coated with sugar!

Try these other pumpkin and fall flavored desserts....

Vegetable Oil. I use oil instead of butter, because it is full fat and I feel like it gives you a more moist donut.

Pumpkin Puree. This makes your donuts pumpkin flavor! Make sure to use only pumpkin puree and NOT pumpkin pie mix

Spices. I load my donuts with spices. I use the best combination of Cinnamon, ginger, nutmeg and clove. you can replace this with 2 tablespoon of pumpkin pie spice instead.

Baking Powder. This makes your donuts rise! Baking powder unlike baking soda doesn't need an acid to rise your dessert, so its my go to when you want a higher rise.

Cinnamon Sugar. I topped these donuts with cinnamon sugar, but you can make a maple glaze instead with just some powdered sugar, milk and maple syrup!

My Biggest tip is you do not need to mix your dry ingredients in a separate bowl when baking. This is usually suggested so that you combine your dry ingredients evenly first before you add it to your batter and so that you can add them slowly to avoid clumps. And while this may be needed for some recipes it is not required for most. So I like to make less dishes and still get amazing desserts. I use One large bowl and combine all my wet ingredients. Then in the same bowl I add my dry ingredients.... I lightly mix these ingredients that are on top first... and then whisk it all together. This is easier, makes less mess and gets the same results.

2. Are Baked Donuts healthier? Kind of. You are eliminating a lot of oil, so there is by far a lot less calories but by no means are these healthy donuts. Just enjoy them!

3. Can I make these wit a glaze instead of cinnamon sugar? Absolutely, I would recommend a maple glaze using 1 cup of powdered sugar, ¼ cup maple syrup and a splash of milk if needed.

5. What If I do Not Like Clove? Clove has a bad rep. People think they do not like it because on its own its WAY too overpowering and bitter. But if balanced nicely with all the other sweet and spicy spices clove adds that perfect fall balance of flavors. BUT if you prefer you can leave it out.

These Pumpkin Donuts are best eaten fresh out of the Oven, So I recommend making the batter and if you don't think you will eat all 20 in a day or two.... then I like to refrigerate half the batter and bake the second half a few days later. You can also freeze the batter in a freezer bag for up to a month. Defrost it and bake like normal.

But the baked donuts them self can hold in an air tight container in the fridge for up to 3 days. Note these are not fried so they hold up longer than your average donut.

Lastly, if you try out this recipe, be sure to leave a comment/rating on how it turned out. I love hearing from you guys and will try my best to reply to every comment! And don’t forget to tag me on Instagram! 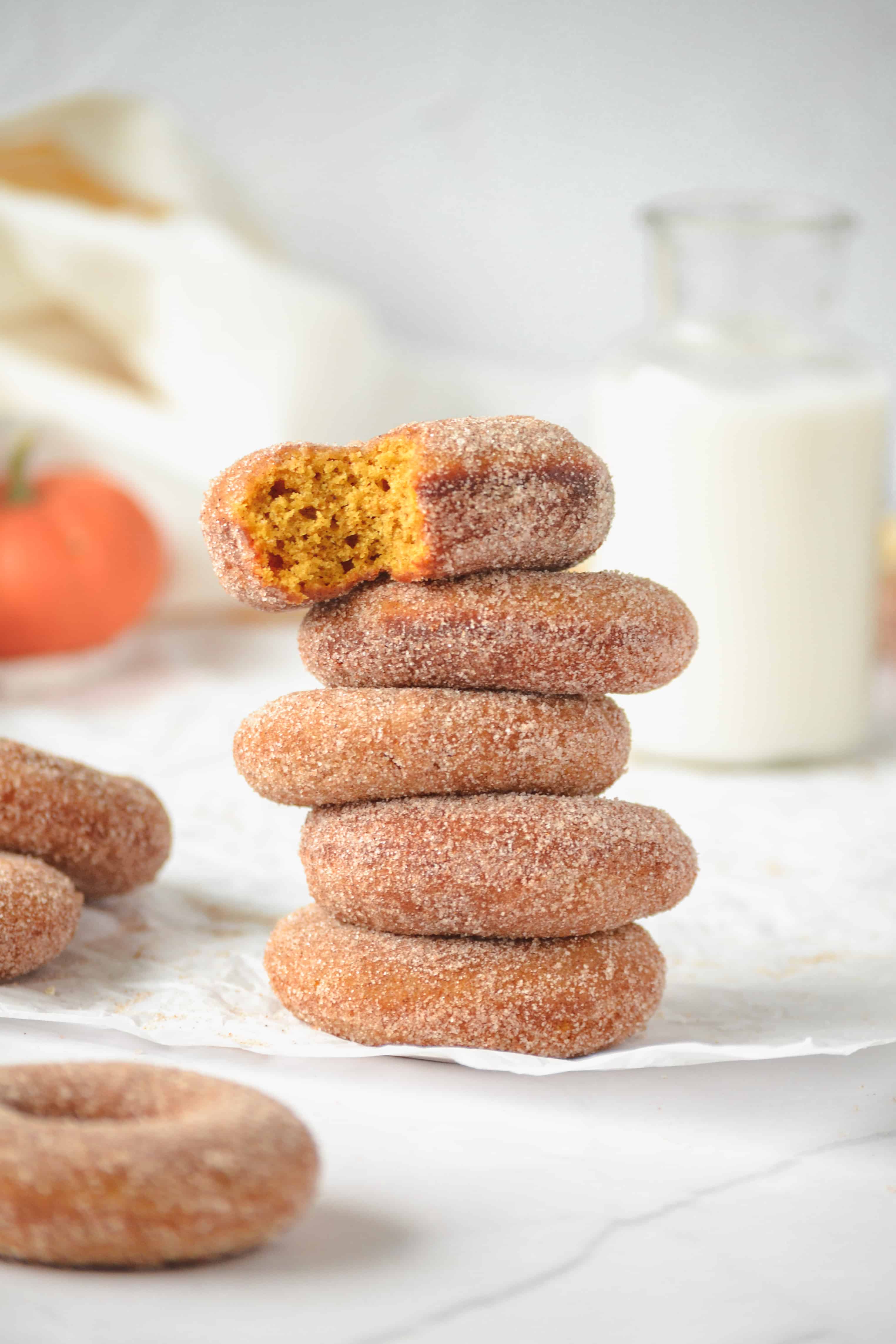 Tried this recipe?Let us know how it was!
« Maple Shortbread Bars
Oreo Cupcakes »

for your weekly recipe fix.

Hey, I'm Megan! My recipes are all inspired by the people and places I love. I try to live, bake and eat simply but beautifully. I hope to inspire others to bake, make and find their inner artist.

How I feel about summer ending…. Peanut butter